Over on an open river

Posted by David Joseph Bircumshaw at 10:36 No comments:

All night the rain has argued with the wind.
A balloon turns at its mooring, as if adrift
in the hushed pillowed weather of my head.
Our foxes hide as the dawn’s throats wake.

Each night all a cabinet’s drawers hurtle
open, its filing flung as if wind-blown.
A twisted aerial crooks to a sinking signal.
I dig out my heads from a light dung loam.
Posted by David Joseph Bircumshaw at 10:07 No comments:

At first there was a slight problem with bendy tape.
It might have been in metric. Or a half-truth in inches.
I had bought a satellite box, second-hand. I like to peer
into the mundane, like a ball, surfing regional news
because: it reminds me of hotels. Those crumbling cliffs
near Cromer, the shifting lists of Munros, a postponement
(the gift of seeping sewage) of a County Flower Show.
I licked a stamp for old times’ sake and thought of islands shrinking

and a strange e-mail on metrics. Oh the eternal anonymity
of three-star rooms. There must have been a map once

that fit went a voice on the street, climbing my peephole
window and so a camera panned from the back of my head

and the clothes that didn’t quite, taking in the skies, the streets,
the farms, the trees, like a greedy sucking engine

looping the continents. I saw huge calendars overthrown
like statuary; I saw a scarecrow taller than the moon.

And knew the size of it was somewhere, like a pavement,
or the story of the last thing you’ll ever see.

David Bircumshaw. © 2013
Posted by David Joseph Bircumshaw at 12:51 No comments:

Dead Letter and Out of Tune

Someone wrote to me claiming to be Paul Dresser (died 1906) and asking (I quote); "Dear Leicester Poetry Society. Why doesn't poetry have a music genre?"
To which I could only reply "Have you ever heard poets sing? I have."
Interpretation of both question and reply is up to the reader
Posted by David Joseph Bircumshaw at 11:19 No comments:

Whatever it is, it is not fair. Near Tenbury Wells, Worcestershire: 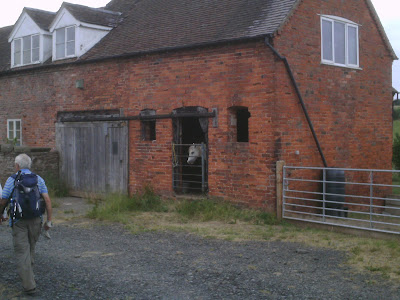 Posted by David Joseph Bircumshaw at 14:15 No comments:

(received in my daily junk):

This is just a quick press release to inform you we have launched on our new website a special discount for Poets. Actually, not just Poets but other human beings that add something positive to the world we live in. if you have a minute please click below and see we are an ethical company supplying natural products,  some of which can benefit writers through creating interesting aromatic atmospheres and also personal well being . If you think your society has an interest in mentioning us in a newsletter then contact us and we can provide a further special offer/free , relevant gift for your members."

Y.O.Y.
Posted by David Joseph Bircumshaw at 08:11 No comments:


The false, heroic head he once lifted above more or less the same crowd as that to which Captain Fuller and the anarchist Aldred proclaimed the new aeon has become cumbersome, monstrous. In the dim stale light it resembles nothing so much as the skull of a horse, but is sealed, lacking all seven apertures.

At length he becomes too irked by my pursuit to ignore it further and makes as if to summon me, but no power resides in him now, and when he swivels to claw at my shirt, the effect is merely comic. So he turns and brushes his fingers against the hedge wall afresh, flustered.

AE is overwhelmed by the wealth of material in this issue. First, we print book V of ‘The Memory of the Drift’ in its entirety. Next, a David Chaloner memorial. By singular good fortune AE has been given access to the archive of his letters. We chose a time of dialogue with John Hall. David's poems take place in a 'permanent present' and these remarkable letters are meant to recover a 'deep present', the Now in which the poems were written. This feature presents a moment of time preserved like a crystal, a formative moment for poetry. It is 1969 and: & just abt to begin Jeremy Prynne's book The White Stones have you seen that at all What have you been doing since our last letter & where are your poems appearing I've not seen any for such a long time Did you see the last copy of collection & the last resuscitator I thought you'd've been there

Then, we open the window on a new generation with an anthology of Ninerrors poems. This field is so new that it can't be described. The concept is ‘Twin Peaks': two moments, one of around 1969 and one of 2010. There is a 'continuity of the unknown' and the course of brilliant innovation which David was embarking on resembles the course of the poets around Freaklung.

as the freedom of information act failed to demand a
supposed ‘transparency of normal speech’, it turns upon
us to decolonize rhetoric & the wider sphere of language,
syllable-by-syllable. we are to start with ‘radical’, ‘fairness’,
‘social’ & it’s derivatives, ‘rhetoric’, ‘free’ & words used in
justifying a notion;
there is now animal fat in the extinguishers; we have begun to
bribe refuse collections;
we have deduced the frequencies of sound that enact violence
on private property, we
are counting heads

When we subtract the certain and the possible, there is the new poetry. What will they think of the poetry of the recent past?

Posted by David Joseph Bircumshaw at 13:22 No comments: